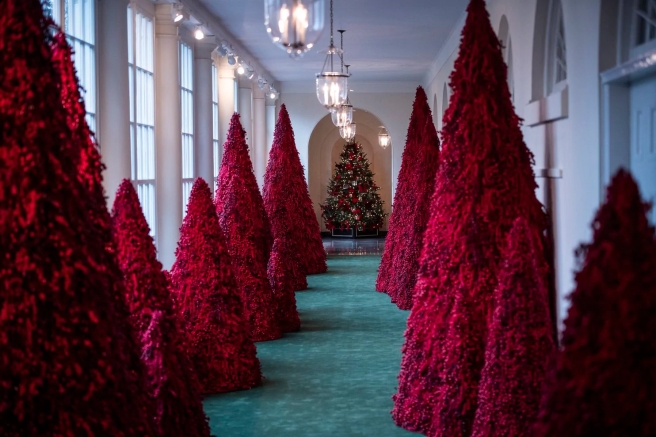 editor’s note: this poem was an ekphrasis piece in response to a call SBGS put on twitter for poems inspired from the white house’s very grim choice in christmas decorations as seen above.

Before we understood
that hoarding was included
in the Mental Anguish Act
we kept the tapering trees
in the hallway, their needles
abundant and invisible.
Their cones were ampules
of congealing blood
that broke underfoot like ice
in a poem involving death
under arboreal glass.
Like extras who outstay
their welcome in a scene
where a woodsman taps
his wrist for a pulse,
each tree mapped
it’s own trajectory
from seed to being else-
where in the world.
They grew. Their shadows
were cropped and kept
in specimen jars inside
the pockets of our coats.
We gave them names.
In the one-way flight
manifest we hammered
to the wall, we called
each bleeding specimen
to account, then stripped
them to the bark.
Our hoarding healed,
we went like crime
scene cleaners, gloved
and masked into the stains
light leaves like sutures
in the dark.

Anthony Lawrence often tries to extend the metaphor he lives in into prose, but poetry sets snares at every exit and he returns to the broken line, the phantom rhyme, the image with ‘do not revive’ stamped into its skin. He teaches Creative Writing at a university in a town with high levels of humidity, and lives beside a bay in a Queenslander with a painter, a dingo and a kelpie. Twitter: @tide_inspector