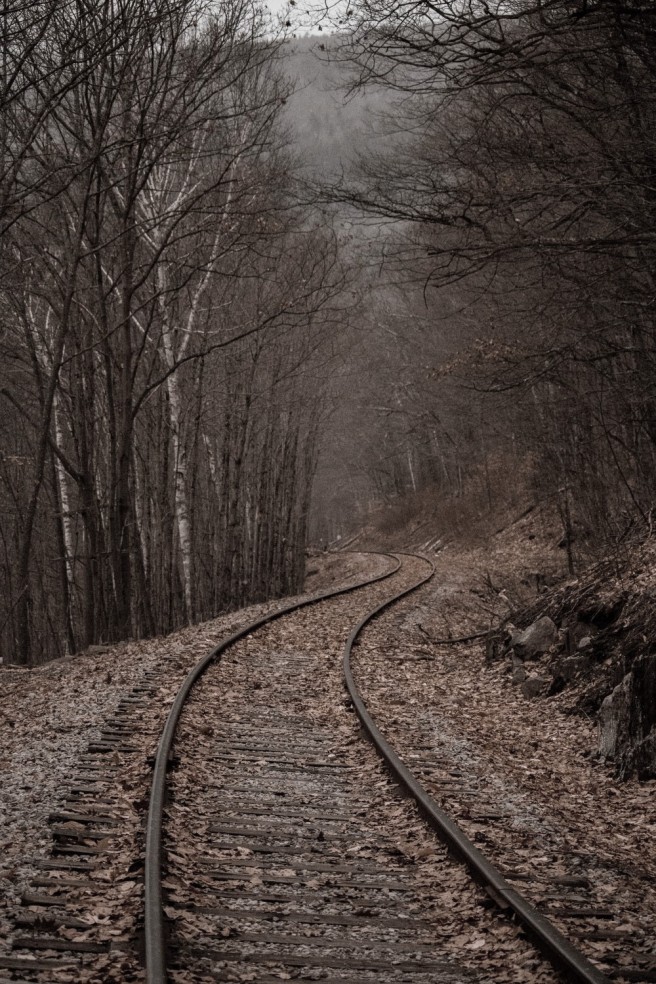 At five o’clock, Arthur Lothbury put on a gray felt fedora, inserted a fresh white handkerchief in the breast pocket of his jacket, and stepped out the front door for his daily stroll.

The town was a cluster of brick and frame dwellings of the 1800s. Located in a hollow, on a railroad line that was no longer active, it had three churches, a dozen shops, a post office, a school repurposed as a senior center, and a white-columned filling station with a porte cochère. At the center, where two main streets crossed, the town hall boasted a mansard roof and a clock tower. The tallest structure in town, with a face on all four sides, the clock tower rose above the trees like a sentinel.

Arthur kept the clock tower in view, though he was unlikely to get lost in the town where he was born. He generally walked for exercise, but this afternoon he dawdled. His gaze wandered left and right. It was early spring, still bleak but mild. Buds swelled on the trees. Cold weather had delayed them. Slanting rays of the sun lit the quiet streets. No one else was about, which was odd for the end of a weekday.

He stopped to examine a flowering shrub that overhung a picket fence, as though eager to escape. The yard was unkempt, in a town that was proud of its gardens. How could such a thing happen? Who lived in this house? He knew many neighbors, but not all. In retirement, he was losing track of changes in the population.

This house must have a tenant, someone who did not care for the place. A deflated ball and a broken toy lay on the weedy lawn. Rolled newspapers littered the porch, dusty and yellowed. Maybe no one lived here.

Arthur moved on. It was an effort to put one foot in front of the other. Yet the day had passed in idleness—light housekeeping, some reading, an hour at his desk paying bills, a letter to a relative. What had he done to be worn out?

A single man with many friends and few responsibilities, he ought to enjoy this stage of life, an endless stretch of leisure. But contentment was elusive. He urged himself to walk faster. Chin up and eyes peeled! At any moment, a friend or stranger was likely to cross his path. He would need to say something cheerful, a word of greeting. But the town was deserted, as if Arthur had missed an order to evacuate. He looked straight ahead and spurred his flank. But his feet dragged.

Coming to an alley, he stopped to peer down its length. He seldom walked in this part of town. He knew it like the back of his hand but not this alley. It bordered the railroad track—that was the trouble. The sun trembled on the horizon. The alley was already in shade. Lined by sheds and fences, it promised things of interest—an old wagon, a gnarled tree, a forgotten bicycle like a sketch of lines and circles.

Arthur strolled down the middle, over gravel and grass. The alley was long—he could not see the end—and growing dark. He tried not to scuff his shoes. He hoped he would not step in a puddle. Not a living creature met his eye, not so much as a sparrow. Then a small shape shifted. A cat crouched a few feet ahead.

Cats lurked all over town. Some allowed him to pet them, some rolled at his feet, and some fled. This one stared coldly. Whoever said that cats were curious? Another step, and the cat disappeared, perhaps through a hole in a fence.

Dusk came on. Was it so late? Arthur looked around and did not see the clock tower. How long had he been walking? He had left his watch at home. Was this a blind alley? To turn around would be an admission of defeat. Despite fatigue, he pressed on.

The alley ended at last in a building with a passage through its ground floor. It was now night. At the far end of the unlit passage was a gate, with open space visible through the bars. Should he enter? What if the gate was locked? He was too tired to retrace his steps. Go forward and hope for the best.

The passage was empty. Beyond the gate was a street. He grasped the gate and pulled. In the hollow space of the vaulted passage, the rusty hinges groaned. Arthur flinched at what sounded like a voice, the drawn-out syllable “woe.” Arthur stepped through the arch, and the gate clicked shut. On impulse, he tried it. Locked.

The street was built up on one side. The other was open to the railroad. Arthur had not been here for years. Shops were closed or boarded up. The pavement was cracked and littered. He wanted to sit, but where? A short distance away stood the old train station, abandoned. A light burned inside, the only light in this gloomy wasteland. He trudged toward it.

A low rumble made itself known. The earth shook. The rumble grew and grew to a roar, until it was unmistakable. A train! Arthur reached the platform as the train arrived. In a stupor of exhaustion, he watched it slow. It looked like an excursion train from the century before, an antique restored to service for a single run. It screeched to a stop, a door opened, and a stair dropped at his feet. Where was the conductor? The side of the coach bore a name: “Acheron.”

Was that the destination? Arthur grasped the metal railing and climbed aboard.

Robert Boucheron grew up in Syracuse and Schenectady, New York. He worked as an architect in New York and Charlottesville, Virginia, where he has lived since 1987. His short stories and essays appear in Bellingham Review, Fiction International, London Journal of Fiction, Porridge Magazine, Saturday Evening Post, and other magazines.