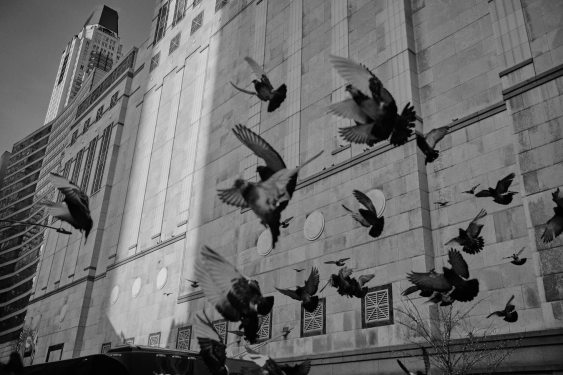 I tried to write this poem on a typewriter.
The typewriter must be broken.
A blank page eats my fingertips.
I keep hammering space,
the only key still barely functioning,
until more and more blank pages
stare me in the face,
contemplating
the taste of my tongue.
I would throw it all out the window
if it weren’t for pigeons
bearing psalms of peace and vanity.
Over my shoulder
Robert Bly sits at a council fire
jacking off the ghost
of his younger self
while screaming something
about grief.
He is joined by the ghosts of
Abraham Lincoln and Hamlet’s father,
who chastise him with
banshee like battle hymns
and marching orders.
I can hardly hear them all
above the noise
of falling bombs,
bombs failing to hit the mark,
exploding in the periphery.
Ink splatters the blank
pages and my lips.
It tastes of blood.
Without story,
how can we
speak of god?
The long line of my forebears
steals letters from my head

with red hands
that tattoo sin into my skin.
I have sent many characters in
pursuit of an all-father
only to watch them fall
into the belly of the beast
becoming trapped behind
cage-like typewriter keys
when the sword of Hamlet proves
stronger than my pen.
Lincoln can no longer spell tragedy
with that hole in his skull.
Overhead a circling hawk cries Katsu!
Its sharp talons reflect the sun
as it lets fall another bomb.
Impact. Detonation.
That which is whole explodes into chaos,
chaos becomes equation,
equation becomes form, and as the pieces
of the body fall back to earth
I see the words that have yet to be written:
The council fire is embers.
Robert Bly is still muttering under his breath,
but Lincoln has run out of lines to read
and the ghost of Hamlet’s father
rests avenged.
The pigeons peck them all to pieces and
carry away some blank pages.
In the silence I notice
a pencil behind my ear.
It is short with no eraser,
badly bitten.
I stole the pencil from a young
fisherman by the name of Manolin,
who in search of the Old Man
hauled the pencil in from amid

the wreckage of the Pequod,
where it had come to rest
upon the deck within the claws
of a murdered Albatross.
The pencil has changed many hands.
The typewriter is still broken,
but it no longer matters.
With this pencil I shall carve
words into the blank page before me.
Overhead a hawk cries, Katsu!

John Haworth is a poet and writer in pursuit of a modern mythology. His work has appeared in Under the Devil’s Thumb, The Boulder Weekly, Spit Poet, and Braided Way. John is a self-educated bibliophile peering under every rock and twig for the answers to questions he can’t remember asking. He lives in Nederland Colorado and is not haunted by waters.

One thought on “a hawk cries katsu – john haworth”