Fate arrives in her mailbox. And with its arrival, a decision. Fate is a red matte lipstick, a special order that arrived for Nicole Masterton, the person who lived in 12A before Allie. Allie has lived in 12A for five months, and she still receives Nicole Masterton’s mail. Sometimes Allie takes the mail to the post office and leaves it. Sometimes she throws it away. The magazines and catalogs she keeps. She guesses Nicole must be a fashionable young woman with a formidable shoe collection.

She doesn’t generally open Nicole’s mail, except for she did open the heavy envelope, embossed, that turned out to be a wedding invitation. Allie doesn’t get invited to many weddings. The fancy envelope has been sitting on her end table for three weeks, the gilded RSVP card askew as if the person who opened the invitation to the nuptials of Sarah Jane Laux and Jeffrey George Bolingbroke couldn’t be bothered to hurry an answer.

Allie imagines Nicole waiting for a wedding invitation, wondering if she had been forgotten, if she should call and inquire, if she should just show up as if the invitation had arrived as expected. Or if she should be hurt, or angry. Allie has considered bundling it all back into the torn envelope – why hadn’t she used a letter opener? surely such an envelope warranted a letter opener? – and taking it to the post office with a murmured apology. Instead, the envelope sits there, silver-foiled and pretty.

And now Fate has arrived. Allie doesn’t think of herself as a red lipstick type of girl. But when Fate is delivered to your door, oughtn’t you to accept it? The lipstick is a good match for Allie. It complements her complexion. She wonders what Nicole looks like, if Fate looks as good on her.

Allie wears Fate on her lips and goes to Nordstrom’s. She walks through the women’s section, aimlessly trailing her fingers over the sale racks and she sees it, a dress red as Fate. A dress in her size, on sale so ridiculously low she’d be a fool not to buy it.

For two days the dress lays over the back of a chair, waiting, like the wedding invitation. But Allie has known since she held Fate in her hand that she was going to the wedding. She wants to see it, to see this wedding announced with such an elaborate invitation, sent to a woman with a chilly name like Nicole Masterton who buys a lipstick called Fate.

Inside the church it’s all flowers and tulle and crystal and candles. Extravagent. Allie doesn’t sit all the way in the back as she’d planned. Women with Fate on their smiles don’t sit all the way in the back. She sits on the groom’s side, looking on the bride’s side for someone who might be Nicole Masterton who surely came, who isn’t at home sad and angry, whose friends told Sarah Jane Laux about the lost invitation and she surely was sent another.

The ceremony is beautiful, of course. The bride could grace the pages of Vogue and maybe she does. Allie dabs her eyes, caught up in the couple’s first married kiss. She finds herself in the receiving line, and she hugs the bride, who glows with happiness, and she hugs the groom who says, “It’s so good to see you again, it’s been so long.” It has, she agrees, but he doesn’t really know her. She leaves a touch of Fate on his cheek. It’s ok, she brought Fate with her in the tiny purse she dug out of her closet from prom years ago (from prom! seriously!) and she’ll keep Fate with her all night.

Because of course she attends the reception. The tables are set with name holders. There are two tables for those who have not RSVP’d. Allie wonders if she’ll be seated near Nicole Masterton. She doesn’t catch all the names as introductions are made, but Nicole is not one of them. She gives her own name as Tiffany Smith and hopes she remembers it later, if necessary. When she’s asked how she knows the bride, she says she knows the groom, but it’s been a very long time, not since they were quite young and the blush that warms her cheeks at the lie makes her wonder if people will assume they were lovers. She imagines what it would be like to have been his first love. Someone clinks a glass and the happy couple kiss. Allie smiles with her Fate lips. The table she is at is far from the wedding table, this table reserved for those without reservations.

Allie leaves a mark of Fate on the cloth napkin, reapplies in the Ladies where every moment she expects to run into Nicole Masterton, whose invitation she usurped. Allie smiles at the mirror. Fate looks good on her. So does the dress of the same hue, the only one like it she owns.

She watches the couple’s first dance. She leaves traces of Fate on more than one champagne glass. It’s past 11 when she decides to leave. The reception shows no sign of slowing down, and Allie wonders if it will end at midnight or continue until the sun rises.

Allie walks past the cloak room, past the bathrooms on her way out the door. The groom emerges from the men’s room. “Wait,” he says to her. “Don’t leave yet. I’ve wanted to talk to you all night.”

Allie turns, smiling with Fate on her lips. 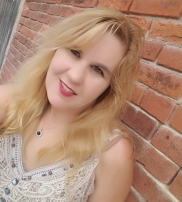 Epiphany Ferrell lives and writes on the edge of the Shawnee Forest in Southern Illinois. Her stories appear in New Flash Fiction Review, Third Point Press, Newfound and other places. She recently received a Pushcart nomination, and has a story forthcoming in Best Microfiction 2020. She blogs intermittently for Ghost Parachute and is a fiction reader for Mojave River Review.