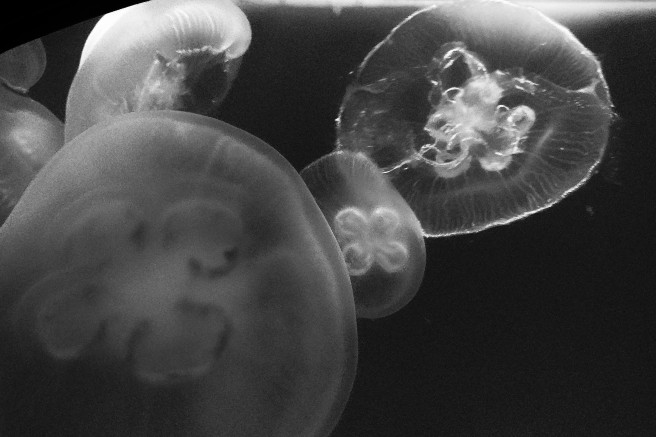 The girl was on her way to Walgreens to pick up her mother’s medication when she found the dead jellyfish on the street corner under that one lamppost that always worked. It wasn’t just one jellyfish, but twenty, thirty, maybe more. They lay in small iridescent globules, some strewn on the sidewalk, others slopped carelessly onto the edge of the sewer grate.

As she watched, wisps like smoke rose from the dead jellyfish and hung several feet about concrete, bobbing up and down like they were submerged in stormy waters. The girl thought the wisps must be the ghosts of all the jellyfish and she wondered when her mother died if she would be able to see her ghost rise and hover.

The girl had heard that jellyfish were biologically immortal, that they would naturally live forever, and she wondered if these dead before her had known it was coming, if they had planned their last days accordingly, or if they had been torn from a life everlasting like slaughtered angels.

The jellyfish ghosts cast morphing shadows on the dirty ground beneath the ever-steady lamplight, moving into and through one another, bringing out strange images from the cacophony of movement like unintentional shadow puppets. The girl pulled out strange, fantastical shapes as if she was laying on her back watching the clouds.

When she was healthy several years ago, the girl’s mother used to make shadow puppets with her hands on the wall of their apartment. She would turn off the lights and use a candle as backlight, so the images flickered and grew and danced on the wall with the slightest extra breath or movement in the air. A dove could become a dragon, a shark a leviathan, a butterfly a huge bird of prey, all if she laughed too near the candle. She learned to hold in the laughter, so the air would be still, so the shadows could be what her mother intended. Now, her mother’s hands have twisted into tough claws, slow moving and incapable of making anything like they used to.

The girl stood transfixed for a long time, watching the ghosts of the jellyfish paint in shadows on the concrete. If the ghosts of the jellyfish, continued only to bob foolishly, they’d be there forever. The thought made her angry and she screamed at the jellyfish to leave, to go, to get the hell out. They didn’t leave. They wouldn’t leave. She was crying soon and yelling unintelligibly—a deep throaty yell rising in pitch until it was more of a screech than anything. She balled her fists, she stomped her feet, knowing she was too old for a tantrum but unable to stop it erupting from her.

Why wouldn’t they leave? Didn’t they know they could go? Are they all so stupid just to bob there under the lamppost?

Her voice gave out and she rushed forward swatting at the ghosts and immediately pulled back her hand, stung. It wasn’t a sharp pain, or piercing, or electrifying like it might have been if the jellyfish had been alive, but rather a down-to-the-bone pain, like slow pressure on a deep bruise.

The girl left them there then, running off and forgetting her errand. Later when she was home, she remembered reading, though she couldn’t recall where, that a group of jellyfish was called a bloom or a smack. The text hadn’t specified if there was any difference between the application of the names.

Evan James Sheldon’s work has appeared in CHEAP POP, Ghost City Review, and Pithead Chapel, among others. He is an Assistant Editor for F(r)iction and an Outreach Assistant for Brink Literacy Project.

One thought on “the shadows we make – evan james sheldon”